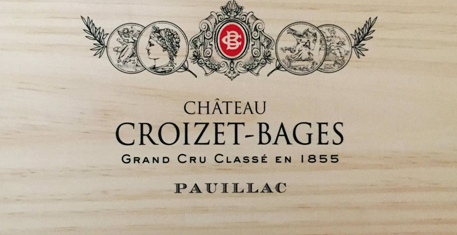 From the seventeenth century, the vineyard was part of the important area of Bages. Located in Pauillac, it ranked fifth great vintage in the official classification of Bordeaux wines of 1855. Sold to Croizet-brothers, the field was a time the US industrial property Jean-Baptiste Monnot, who owned the trademark "Klaxon", then bought in 1942 by Paul Quié, a wine-broker at Bercy. Since 2004, the estate is directed by Jean-Philippe Quié and her twin sister Anne-Françoise. As for their other castle, Rauzan-Gassies, they display the ambition of excellence and producing ripe and fleshy wines. The vineyard Château Croizet-Bages is located on the plateau of Bages, left bank of Bordeaux river Garonne and spreads over 26 hectares. Its soil is composed of gravel mixed with marl and iron ore, ideal for growing Cabernet Sauvignon. Quié-family brings special attention to the proper management of its vineyards: tillage or cover crops, rational management of inputs, double Guyot size with window, secondary shoots and manual repositioning of clusters, stripping front veraison and both sides manually before harvest, manual removal of verjuice in July and August. During the harvest, an initial screening is done manually on foot followed by a second mechanical and manual sorting at the reception at the Castle.