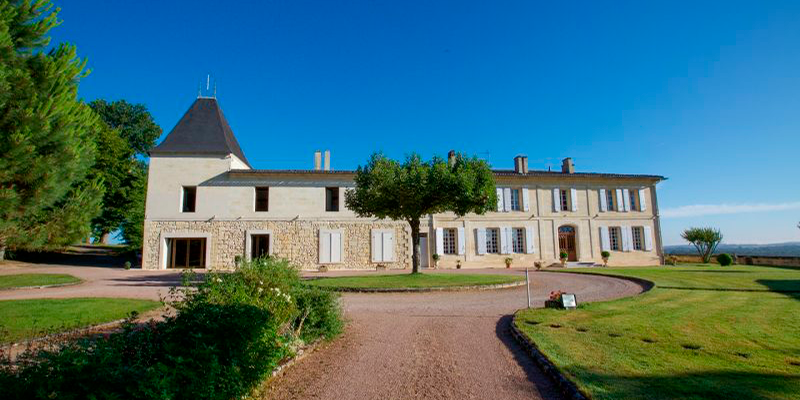 Læs hele ejendommens romantiske historie: "After participating in the conquest of Mexico with Maximilien under Napoleon III, an ancestor of Brigitte’s stayed in Mexico where he married a French woman. In 1930, one of his grandsons, Henri Emile, left the family hacienda to do agro engineering studies in Switzerland. Due to health concerns, the young man was sent to convalescence with the priest of Puisseguin who was related to the family. In this small village, Henri Emile is doubly attractive: First by a young girl, Yvette, his future wife, whose family owns Château Guibot La Fourvieille and by Château Guibeau, adjoining Château Guibot La Fourvieille, that he acquired in 1936. The marriage of Henry Emile and Yvette combines the two properties that now form a single entity of 45 ha: in appellation Puisseguin Saint Émilion 38 ha and Castillon Côtes de Bordeaux 7 ha. Henri, the son of Henri Emile, ran the vineyard and winemaking techniques change until 2009, when he entrusted the property to his daughter Brigitte and her husband, Eric".

This small estate is the property of the Bourlon family, whose last heiress, Brigitte, took over in 2009 with her husband Eric. They are two kind-hearted people and one can feel it in their wines. According to her, the organic experience is difficult in Bordeaux due to high proportion of climactic incidents. But she doesnʼt regret at all when she notices the quality improvement on the wines and the better expression of fruit she has gained. Their soils are likely to give full-bodied wines. But, as organic brings finesse and elegance, the result in the glass is very harmonious. This family property produces wines of great purity that are also a pleasure to drink. The nose reveals red fruit with a hint of vanilla. The palate has good structure and concentration with a long aromatic finish. A wine full of character with all the charm of its terroir.