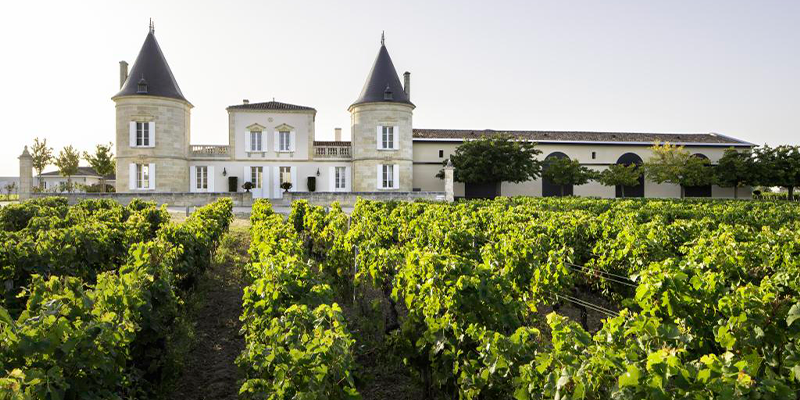 The family are very proud of the path they have followed. In 2020, after the Lorenzettis had restructured their premium Saint Estèphe vineyards and chosen to tailor their viticultural practice to respect the environment, Château Lilian Ladouys was anointed a Cru Bourgeois Exceptionnel.

The history of Château Lilian Ladouys is intimately linked with that of the Medoc as a whole. The existence of an estate called La Doys, named after a spring that once existed there, is confirmed in Terrier de Lafite's 1564 land register. At the time, it belonged to Jacques de Becoyran, Lord of Lafite and a major figure in the Medoc.
The Barre family acquired the estate in the 18th century and owned it for over 150 years, gradually defining its identity. During the 19th century, a golden age for the Medoc, the Directoire-style maner house was flanked by two well-proportioned towers symbolising the timeJess elegance of the Medoc, and the fusion of wine and culture.
In 1850, the first edition of Cocks & Feret included Ladouys among the top wines of Saint Estèphe, and it was later classified a Cru Bourgeois.
Like many estates in the Medoc, Ladouys was badly affected by the First World War and the economic crisis of the 1920s. It was sold and subdivided to the point where the vineyard ceased to exist as such.
In the mid-1980s, Ladouys was acquired by Christian Thieblot and his wife, Lilian, whose name was added to the estate.
Seeking to buy prestigious vineyards in 2008, the Lorenzetti family became aware that the chateau was up for sale. Very attracted by the estate, Jacky and Françoise Lorenzetti became the proud owners via their family holding company, Ovalto Investissement. Relying on the finest winemaking experts and consultants, they are determined to manage the estate in an environmentally-friendly way in order to maintain and further improve the wine, and to become a reference for the entire appellation.
Sustainable viticulture, careful monitoring of ripeness, harvesting each plot at peak maturity, precision winemaking ... Everything possible is being done to make the most of the outstanding terroir.
Jacky and Françoise believe that the four-leaf elever that adorns one of the chateau's noble, round towers symbolises the lucky star under which their new venture was born. Seeing it as a link between the past and the present, and reflecting qualities of freshness and optimism, they decided to make it the symbol of their vineyards.
Bordering on Pauillac, Lilian Ladouys has 48 ha of vineyards with almost every type of soil found in Saint Estèphe. From the slope overlooking the river, to rises running parallel to the forest, to a plateau, the vines grow on gravelly, clay, and sandy-clay soil. The combination of these diverse soils and 30-50 year old vines perfectly adapted to each plot explains the unique personality of Lilian Ladouys. It is deep, round, and fruity with a rich, elegant bouquet and a smooth, powerful flavour.